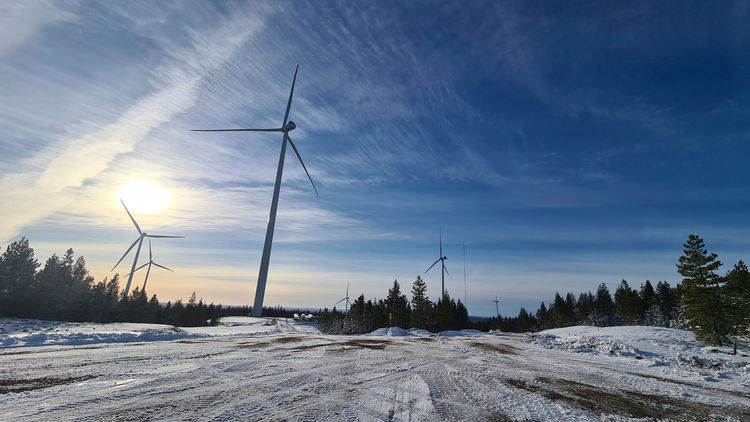 Volkswagen intends to be fully net carbon neutral by 2050. That is why the company is going well beyond electrification of the car with its holistic decarbonization program “Way to Zero”.

Volkswagen intends to be fully net carbon neutral by 2050. That is why the company is going well beyond electrification of the car with its holistic decarbonization program “Way to Zero”. Volkswagen is the first car maker to support expansion of renewable energies on an industrial scale – and will drive expansion of European wind farms and solar plants with around €40 million up to 2025. Volkswagen has now agreed the largest project in its portfolio to date with the wind farm specialist wpd Onshore Aldermyrberget AB in Skellefteå, northern Sweden. Volkswagen’s share of the wind farm generates some 100 GWh of electricity, or enough for 27,000 households. As a result, Volkswagen is also living up to its responsibility as the market leader for electric vehicles in Sweden. In connection with net carbon neutral manufacturing of its ID. models, Volkswagen is now taking another big step towards its goal of net carbon neutral use of electric vehicles over their entire life cycle.

As well as accelerating the transition to e-mobility and further expanding the ID. family as part of the ACCELERATE strategy, Volkswagen is supporting investments in wind farms and solar plants and thus increasing the amount of electricity from renewable energy sources available in the grid. In this way, the company is improving the climate footprint of the ID. family and creating the basis for the net carbon neutral use of its electric fleet.

“Volkswagen is irreversibly on the ‘Way to Zero.’ Decarbonization and making mobility sustainable are at the focus of our activities. We are the first car maker to support the expansion of renewable energies on a large scale. Because e-mobility can only make an effective contribution to climate protection if electric cars are consistently charged with green electricity,” says Volkswagen CEO Ralf Brandstätter.

Besides the wind farm in Sweden, a new solar plant in Tramm-Göthen in northeastern Germany will go online at the beginning of 2022. The joint project with the energy company RWE has around 420,000 solar modules and is the largest independent solar project in Germany. It will be followed by about 20 further green electricity projects in countries such as Spain, the UK and Finland by 2025. All the projects are to generate a combined total of some seven terawatt hours of additional green electricity. That is equivalent to the capacity of more than 300 wind turbines and could cover the annual consumption of 600,000 households.

A key factor in achieving carbon neutral e-mobility is to be able to charge vehicles consistently with electricity generated entirely from renewable sources. This alone would reduce CO2 emissions by almost half compared with the standard EU electricity mix. Volkswagen already offers its customers green electricity for charging at home (Elli) and on the road (e.g. at IONITY charging stations). By making these investments in expanding renewable energies, the brand is going one step further and supporting the creation of wind farms and solar plants in European regions with the highest sales of Volkswagen electric vehicles.

“We think and act regionally in our project decisions. Our focus is on investing in renewable energies in particular where electric vehicles from Volkswagen are especially popular among customers. Our stake in the wind farm in Sweden is therefore a logical step. With the biggest green electricity project in our portfolio to date, we are also living up to our responsibility as the market leader in electric vehicles in Sweden,” says Andreas Walingen, Volkswagen’s Chief Strategy Officer.

Volkswagen intends to be net carbon neutral by 2050 at the latest. The interim target is to cut CO2 emissions per vehicle by 40 percent in Europe by 2030 (baseline: 2018). As a result, an average Volkswagen would emit around 17 tons less carbon dioxide. As well as accelerating the transition to e-mobility, the production (including supply chains) and operation of electric cars are to be made net carbon neutral. Added to this is the systematic recycling of the high-voltage batteries from old electric vehicles.

At the heart of the “Way to Zero” decarbonization program is the brand’s ACCELERATE strategy aimed at stepping up the pace of the electric offensive. The goal is the full electrification of the new vehicle fleet. By 2030, at least 70 percent of all Volkswagen’s unit sales in Europe will be all-electric vehicles – i.e. substantially more than one million vehicles. In North America and China, the share of electric vehicles in sales should be at least 50 percent. In addition, Volkswagen will be launching at least one new electric car each year.

The Peugeot 9X8: From Its Origins As A Virtual Project Made Up Of…

MEYLE Looks Back on a Successful MOTORTEC Trade Fair in Madrid